The ancient city of Ferozepur lies on the riverbanks of the Sutlej in Ferozepur district of Punjab. Founded by Sultan Firuz Shah Tughluq, it is regarded as a historic place where great freedom fighters had laid down their lives for the nation. It is also known as Shaheedon ki dharti or the land of martyrs. As Ferozepur is located on the Indo-Pakistan border, it is also considered as a border town. Besides this, it is the headquarters of the Northern Corps brigade of the Indian Army. It is easily accessed to other places like Jalandhar, Amritsar, Delhi, Ludhiana and Chandigarh by both rail and road.

It is said that the ancient city lying near the Indo-Pakistan border was founded by Sultan Ferozeshah Tughluq in the 14th century. As the Sultan was passionate for constructing new cities and renaming the old ones after his name, it is claimed that the city of Ferozepur was also renamed after Ferozeshah Tughluq. Some historians claim that the city was founded by Feroze Khan who was a famous Bhatti chief.

Owing to the strategic position of the city in the northwest part of India, Ferozepur has been a part of a number of military expeditions in that region. During the Anglo-Afghan war in 1838, Ferozepur was a famous military center for the British army. The first Anglo-Sikh war took place in 1845 at Mudki that lies 20 miles far from Ferozepore. It is believed that the Khalsa troops had successfully crossed the river Sutlej without being opposed by the British troops. Lord Hardinge was then the commander of the British Army. It was in this region that the British established its supremacy over a major portion of North-West India through the Anglo-Sikh wars.

Apart from all these events, the city of Ferozepur has witnessed the struggle for freedom. Great freedom fighters namely Bhagat Singh, Rajguru and Sukhdev Singh had raised the flag of revolutionary terrorism against the British rule. Owing to this, they were executed in Lahore on 23rd March, 1931and then furtively cremated on the riverbanks of Sutlej in Ferozepur. The Shaheed Bhagat Singh Memorial in Ferozepur marks the great martyrdom of the noble freedom fighters.

The city has a dry climate throughout the year. Summers are very hot and lasts till the end of June. The city experiences high temperatures during the daytime. Sometimes the maximum temperature is about 47°C especially in the month of June. The rainy season is short in Ferozepur. It commences in July and lasts till mid of September. Moderate rain is brought by the southwesterly monsoon winds. The city has a pleasant climate in the post-monsoon period that starts from the end of September and ends in October. Winter commences from the month of November and lasts till March. Day and night temperatures start declining from October onwards till January. However, the coldest month is January.

Agriculture is the prime occupation of the people of Ferozepur. The staple crop grown in this region is wheat. High yield of wheat per hectare has been a boon for the rural population. The quality of wheat cultivated here is similar to that found in the Province of Ontario of Canada.

Other crops cultivated are cotton, paddy and pulses. Apart from agriculture, there are a few light manufacturing industries in Ferozepur. As the city is located near the border of Pakistan, less industrialization and commercial progress is seen in the region. 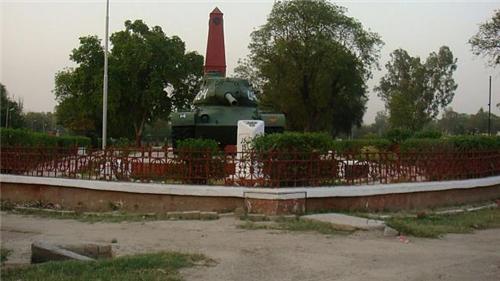 Ferozepur is a center of various sacred shrines and historic places. It has a marvelous Jain Swetambar Temple at Zira. The holy edifice has antique brass icons and gorgeous wall murals. Other sacred places are Hanuman Mandir at Fazilka and Gurudawara Zamini Sahib at Bajidpur. Apart from temples, there are many historical memorials like Shaheed Bhagat Singh Memorial, National Martyrs Memorial at Hussainiwala, Barki Memorial, Anglo Sikh War Memorial at Ferozeshah, Saragarhi Memorial and Pothi Mala at Guruharsahai.