Ferozepur is an ancient city in Punjab. Founded by a Muslim ruler named Sultan Firuz Shah Tughluq, it is regarded as a historic place where great freedom fighters had laid down their lives. It is also known as Shaheedon ki dharti or the land of martyrs. The city is the headquarters of the Northern Corps brigade of the Indian Army and is well connected to other places like Jalandhar, Amritsar, Delhi, Ludhiana and Chandigarh by both rail and road. It is also a sub division and a development block of Ferozepur District. 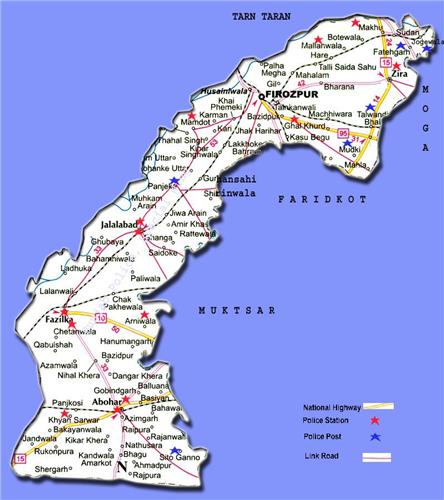 The region has an even topography. As the city is a part of the Plain of Punjab, the soil found here is rich in alluvial deposits. This alluvium soil is chestnut brown in color and belongs to the Pleistocene age. It makes the region best suited for agriculture especially for the cultivation of wheat and rice.

Ferozepur has scanty vegetation. Less flora and fauna can be seen in the city. As water resources are less in this region, the government of Punjab has taken several measures to develop more water resources especially for agriculture. Several canals and reservoirs are being constructed in Ferozepur.

The climate in Ferozepur is generally dry throughout the year. It comprises very hot summers with short rainy season and very cold winters. Summers are very hot and exhausting. The hot season commences from early March and lasts till the end of June. The city experiences high temperatures during the daytime. Sometimes the maximum temperature is about 47°C especially in the month of June which is regarded as the hottest month.

The rainy season is short in the city of Ferozepur. It commences from July and lasts till mid of September. Moderate rain is brought by the south-westerly monsoon winds. Heavy rainfall occurs in the months of July and August. However, there is a huge variation in rainfall every year. Some rainfall also occurs in the winter season. There is a steady decline in day temperatures in the post-monsoon period that starts from the end of September and ends in October. Winter commences from the month of November and lasts till March. Day and night temperatures start declining from October onwards till January. However, the coldest month is January when temperatures fall below the freezing point.