Hussainiwala in Firozpur – The Memorial of Unforgettables

Till today, the breeze flows through the ruins of Hussainiwala where once, stood the memorials of the brave. The birds flying across the borders seem to share the stories of extraordinary valor that inspired the ordinary. Lying on the banks of the River Sutlej, Hussainiwala the small village is bordered by another village Ganda Singh Wala of Pakistan. Hussainiwala has seen very tough times during the 1965 Indo-Pakistan War and 1971 Indo-Pakistan War. 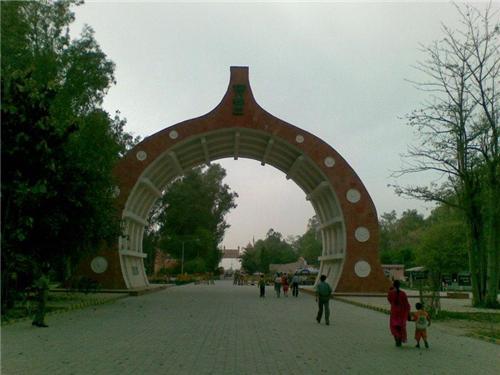 The village is named after the Peer Baba Hussaini Walaji, who was a Muslim Saint known to belong to Hussain. He was revered among the people there. He wandered on the streets and preached the people. He had many followers. Today, his tomb is located at the headquarters of Border Security Force in Hussainiwala.

The Pious Land of Memorials

We all are aware about the revolt of Shaheed Bhagat Singh ji and his fellowmen Rajguru and Sukhdev. They gave up their lives for the nation. But ever wondered about where they rest today? Well, this is that holy land where these brave men were cremated in 1931 on March 23. After 24 years, in 1965, Batukeshwar Dutt was also cremated here as per his last wish. Mother of Shaheed Bhagat Singh who was honored with the title ‘Punjab Mata’ was also cremated here. The land holds tremendous significance being the abode of those brave souls who rendered even their last breath in honour of their motherland. Today people from various parts of the world pay visit and homage to the Hussainiwala memorial which stands just at a distance of 1 km from Pakistan border. Though post partition, the exact spot of cremation was lost to Pakistan, it came back to India when 12 villages of Fazilka district were given. Until the time when the area was under Pakistan, they never bothered to build any memorial in the names of these heroes, despite knowing the fact that these were the brave men who fought for them, before partition. They did not even care to maintain that area and left it like it was abandoned. After it came within the boundaries of India, the memorial was setup again in complete honors.

Damage Caused to the Memorial

Despite the mutual exchange of land across the borders, during the 1971 Indo-Pak war, Pakistan dared to take away the revered statues of martyrs from the memorial. On December 3 1971, at 6:35 in the evening, about 4000 heavily armed Pakistani attackers intruded India along with their 15 tanks. They attacked two companies belonging to Punjab regiment and badly injured the three Indian commanders – Major Kanwaljit Sandhu, Major Waraich and Major Singh, guarding at the post, at that time. They took away the statues of the martyrs. Till date, the statues are not recovered from them. In 1972, the memorial was damaged by Pakistani troops, when they captured the area. In 1973, with the efforts of Giani Zail Singh, the then Chief Minister of Punjab, the memorial was recovered back.

In the Name of Memorial

The Shaheedi Mela is celebrated at the Hussainiwala memorial on March 23, every year. People come from far-away places to pay homage to the patriotic spirit our brave men fought with. Infact, the day is significant in all of Punjab.

The State of Hussainiwala Border Today

Owing to what Pakistani troops did in past years, the Hussainiwala border is closed though till 1970, there used to be a road connecting the two regions. It was meant for truckers as a route to import goods from Pakistan and Afghanistan. The border was closed and in place of it, the Wagah border got the crossing for the trading purpose. Several proposals came up to open the Hussainiwala border, but nothing they were rejected. 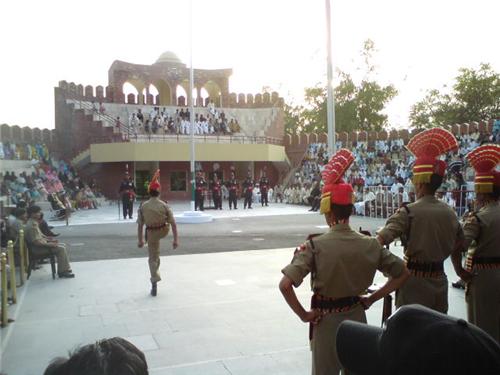 The Retreat Ceremony - The retreat ceremony is carried on here at Hussainiwala border at sharp 6 pm, like at Wagah border. This is been followed since 1970 when the Ashwini Kumar Sharma, the called the authorities to start the ceremony. Since then, the ceremony has been taking place to honor the Indian flag and martyrs who laid down their lives for the sake of its dignity.

As the sun starts setting in the evening sky, you would hear loud and clear taps of those heavy boots of those tall men in Khakhi. You could also hear their thunderclap as they stand straight against their Pakistani counterparts wearing black Pathani Kurta-Salwar. Matching up their respective steps, they follow each and every command given loudly by their commanders. People at both sides of the border watch this from very close proximity. The entire scene is very worth-witnessing as it is a matter of dignity for the nation. At Wagah border, the retreat ceremony at times takes a very dramatic turn while here, it happens quietly and peacefully amongst the locals who watch this happening. The ceremony is carried for 40 minutes. You will find people posing with BSF jawans to get clicked. It is interesting to note that people from both the sides also wave at each other. This is very unlike the situation at Wagah border, where the atmosphere stays a bit tensed. Once the ceremony is over, the patriotic songs are sung making everyone realize the sense of commitment to the nation.

The Hussainiwala village holds lot of significance for Indians. Apart from sharing border with the rival nation, this is where those great sons of the motherland started their journey to the heavens. It has seen the tough times of the Indo-Pak wars, faced numerous attacks by troops of the rival nation, yet stays unfazed by any kind of fear. The people here are spirited and feel proud to be part of this place. They love peace and harmony and that shows during the retreat ceremony every evening, when they wave and smile at the people on the other side; also carrying that amazing sparkle of pride in their eyes!

Explore more about History of Ferozepur